Plant of the Month: Corn 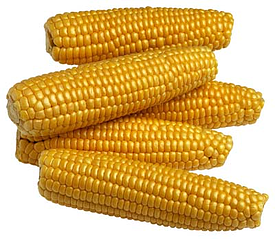 November marks the end of harvest for corn. Even though the majority of corn is picked during the summer for consumption, corn is a trademark crop of the Harvest Season. Harvest Season is a time when the weather begins to get colder and people would stock up for the winter to provide enough nutrients for themselves and their families through the winter.

Colonists learned the hard way when they came to America, about the health benefits of the nutrients in corn, if prepared correctly. Native Americans had long held traditions in the use and respect of corn (or Maize as the Native Americans called it), representing it in art, rituals and using it as their staple ingredient; combining pot ash with the grain to increase the bio-availability of Vitamin B3 in the corn. The colonists ignored the Native American’s reverence for corn and later fell victim to the vitamin B3 deficiency disease called Pellagra which can cause diarrhea, dermatitis, dementia and even death, if left untreated.

Corn also holds many other health benefits. Corn has a good fiber content, an ability to provide many B-complex vitamins including vitamins B1, B5 and folic acid, and has a notable protein content. When consumed in amounts of about 1-2 cups per day, corn has been shown to promote better blood sugar control and many other scientific studies are being done to determine other health benefits such as absorption of nutrients and protein.

Americans, today, still may not have the respect for corn that the Native Americans held for the plant, but it is used in almost every product consumed in the U.S. Corn is a major component in many food products like cereals, peanut butter, snack foods, soft drinks and is used as ethanol for food and for animal feed. Iowa, Illinois, Nebraska and Minnesota account for over 50 percent of the corn grown in the U.S. Other major corn growing states are Indiana, Ohio, Wisconsin, South Dakota, Michigan, Missouri, Kansas and Kentucky.

Corn continues to be in high demand and the crop has just as many problems as any other plant such as insects, mold, disease and environmental stresses. To ensure that farmers get enough cash from their corn crops, despite the natural challenges, many resort to genetically modified food's (GMO) which can resist and withstand most of these problems. Others resort to pesticides, which can also be harmful to the plant and those who consume it.

Farmers across the country are taking note of these concerns and doing something about it. For example, farmers in Hawaii and on the West Coast are using Grower's Secret as their plant aid and fertilizer. Grower's Secret is a better solution for yielding a healthier corn crop as it provides a plant with the proper nutrients via an organic formula, which negates GMOs. Grower’s Secret Pro
promotes plant growth, deeper stronger roots and resistance to the elements which plague the crop. It also shortens the crop cycle meaning you can plant more than one crop, increasing the amount of product and cash flow for farmers.