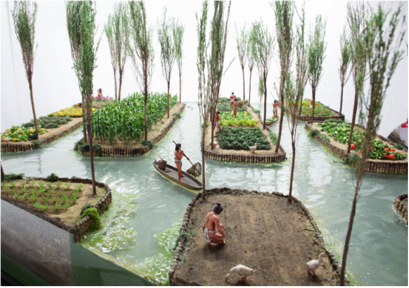 At the 42nd Annual CAPCA Conference & Agri-Expo (October 16-18, 2016) I was very excited to see newly registered microbial products for use on agricultural crops. Some of the products displayed at the CAPCA Conference were Bio-TamⓇ2.0, BotectorⓇ, GrandevoⓇ, RegaliaⓇ, MagesteneTM, TaegroⓇ2, and VenerateⓇ. While these products are fairly new on the market, microorganisms have long played important roles in agriculture. One of the earliest examples can still be found today in the anchored fertile beds in shallow lake beds in the Valley of Mexico. Called Chinampas, they are staked rectangular beds filled with sediment, decaying vegetation, mud, and usually anchored by cypress trees. These beds were organically and biologically rich, and contained beneficial microorganisms such as Fusarium and Trichoderma fungi, and Pseudomonas bacteria. These microbes provided disease protection, plant growth promotion, and nutrient mineralization. Agriculture unknowingly relied on soil microbes (bacteria and fungi) to decompose organic matter, recycle old plant material, and fix nitrogen.

In the mid 1800’s to the early 1900’s synthetic fertilizers were developed and set the stage for the Green Revolution. This period also witnessed a tremendous amount of great discoveries that lead to our understanding that bacteria and fungi can cause disease, produce antibiotics, fix nitrogen, etc. This was followed in the 1960’s when R. James Cook and others called attention to beneficial soil microbes and that there was a need to better understand the nature and role of these soil inhabitants.

Dr. Cook, was hired by the USDA ARS in 1965 and stationed at the Washington State University in Pullman, WA. His job was to provide the science and technology needed to limit or eliminate the yield losses caused by root diseases on wheat. The target, Take-all decline of wheat caused by Gaeumannomyces graminis var. tritici. In the ensuing years, he and his colleagues demonstrated that continuously cropped wheat fields had lower disease incidence and severity than when planted in rotation with another crop. He coined the term “suppressive soils” to describe soils in which disease development is suppressed even though the pathogen is introduced in the presence of a susceptible host (Baker and Cook, 1974). Joining forces with fellow ARS scientists Dave Weller and Linda Thomashow, he showed that suppressive soils were transferable to conducive fields (Cook, 2007). Proof that suppressive nature followed by showing inactivation with pasteurization. Cook and Weller soon isolated fluorescent pseudomonads that were associated with the suppressive nature of the soils. Dr. Thomashow then identified the biochemical nature of the suppression to an antibiotic called phenazine-I-carboxylic acid and later identified, isolated, and cloned the genes involved in its production.

Cook and others that followed showed that there is a rich microbial galaxy beneath our feet. That galaxy has yielded many agricultural products for frost protection, insect and disease management, and improving plant productivity. Most products can be separated into two general groups based on inherent biological properties of the agent. The first group are bioprotectants where a microorganism’s rhizosphere competitiveness, site affinity, antibiotic production, or hyper parasitism are used to manage insect pests and plant diseases (See Mighty Microbes Part II). The second group are probiotics and include microorganisms that fix nitrogen, mineralize nutrients, or regulate plant growth (See Mighty Microbes Part III). There are two driving forces for this growing interest in microbial product research and development. First, organic farming is growing and organic materials are needed for disease and pest management. Second, conventional growers face increasing public pressure and legislative actions to use less toxic alternatives for crop production. Microbes are one of several solutions that can meet this challenge. Going small has become big business.