Boron, Important for Animals, Plants, and Side Hustling

Boron (B) is the lightest element in Group 13 of the periodic table.  Group 13 (the Boron Group) elements have three valence electrons and include naturally-occurring aluminum, gallium, indium, and thallium, and artificially-produced nihonium.  Naturally-occurring Group 13 elements all have biological roles.  Boron is an essential micronutrient in plants.  Aluminum, while it can be toxic to plants under acidic conditions, is normally non-toxic to animals and plants.  Gallium and indium are better known for their use in radio imaging, but they can affect microbial metabolism.  Thallium is toxic and has been used in pesticides.

Elemental boron is rare on the planet earth, accounting for only 0.001 percent of the weight of Earth’s crust.  While pure boron is a brittle, dark, lustrous metalloid, it is more commonly found as brown colored, powdery compounds as such as borax (from which its name was derived).  Borax naturally occurs in repeated evaporation deposits of seasonal lakes.  The largest known borax deposits are in Turkey.  It is also found in Boron and Searles Lake, California, the Atacama Desert in Chile, and in recently discovered deposits in Bolivia, Tibet, and Romania. 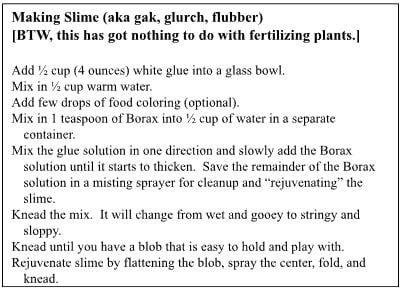 Borax was used as a ceramic glaze circa 300 AD in China.  It was introduced to Italy around 700 AD and was used as a metallurgic flux around 1600 AD.  It was recognized as an element in 1808 when Sir Humphry Davy isolated it via electrolysis of a borate solution.  It has high industrial value in the manufacturing of glass and ceramics using about 1% of the global boron products.     Agriculture consumes 11% of the global boron production as nutrients and insecticides followed by bleaches and detergents that use 6%.  Boron is also important in the manufacture of a popular DIY and commercial moneymaker called Slime.

In animals, boron is essential for growth and maintenance of bone.  It greatly improves wound healing, reduces levels of inflammatory biomarkers such as high-sensitivity C-reactive protein and tumor necrosis factor-α, and may have preventative and therapeutic effects for a number of cancers.  Other beneficial effects include the body’s use of boron in estrogen and testosterone regulation, with vitamin D and magnesium for bone health, increasing levels of antioxidant enzymes, and possible amelioration of adverse effects from traditional chemotherapeutic agents.  Boron may have some protective effects against pesticide-induced oxidative stress, heavy-metal toxicity, and has been shown to improve the brain’s electrical activity, cognitive performance, and short-term memory for elders.

Boron is no less important in plants.  There are numerous documented plant responses to boron fertilization in fruit, vegetable, and field crops.  It is needed for protein synthesis, cell wall development, carbohydrate metabolism, sugar translocation, hormone regulation, pollen grain germination and pollen tube growth, fruit set, and seed development.  Boron is a fixed element in plant tissues.  It is translocated via the xylem after root uptake.  Generally, it is not phloem translocated.  It is readily leached from sandy soils so regular addition of small amounts of boron is often necessary for many vegetables.  Boron is required in such small amounts that there is a narrow range of boron amounts that can be safely added.  This is an important consideration in light of the considerable variation in the amount needed by different vegetables.  Plants that require high amounts of boron include beets, broccoli, cabbage, cauliflower, rutabaga, spinach, and turnips require 3 pounds/a.  Medium boron-requiring plants include asparagus, carrots, cucumbers, eggplants, leeks, muskmelons, okra, onions, parsnips, radishes, squash, strawberries, sweet corn, tomatoes, and potatoes require 2 pounds/a.  No more than 1 pound/a of boron is required for low boron-requiring plants such as peppers and sweet potatoes.  Usually no boron addition is required for beans or peas.  Lastly, snap beans are particularly sensitive to boron and toxicity symptoms readily result.

Boron concentrations in agricultural soils range from 1 to 467 mg/kg of soil.  Coarse textured soils such as high quartz-containing soils commonly show boron deficiencies.  Leaching of boron can occur in sandy soils or areas of high rainfall.  Boron is available to the plants in the soil solution as B(OH)3 and B(OH)4 but can be absorbed to soil constituents such as iron and aluminum hydroxides, clay particles, and organic matter.  Of these, organic matter is the most important soil reservoir of boron.  Temporary boron deficiencies can occur in high boron requiring crops when organic matter decomposition is slowed by cold weather in early planted crops.  Hot, dry weather may also cause boron deficiency symptoms however, these symptoms may disappear with rainfall and resumption of root growth.  In both situations, yield potential will be impacted.

The optimum availability of boron to plants occurs between pH 5 and 7.5.  Liming of acidic soils can help with the availability of applied boron.  In high boron soils, lime can also be used to reduce boron toxicity in sensitive crops.

Boron is a “fixed” element in plants so deficiency symptoms usually show in growing points and young leaves.  For most situations, boron is not mobilized from older tissues.  Boron deficiency symptoms in plants include the death of growing points resulting in a stunted or rosette appearance.  Leaves may exhibit a yellowish or reddish cast.  Members of the cabbage family develop cracked and corky stems, petioles and midribs.  The stems of broccoli, cabbage and cauliflower can be hollow and sometimes discolored.  Cauliflower is the most sensitive to boron deficiencies resulting in brown cauliflower curds, and leaves that roll and curl.  Cabbage heads may be small and yellow.  The following is a list of boron deficiency symptoms for a few other crops.

Boron toxicity is common in western states where boron levels in soils or irrigation water are high.  Toxicity symptoms can also occur in low organic matter-containing coarse soils where boron is readily leached.  The margin of safety for boron application is small and excess application or improper blending in fertilizers may lead to toxicities.  Deficiencies show up at 1 ppm and toxicities appear at 5 ppm of available boron in the soil (leaf tissue levels between 20 and 100 ppm are sufficient; tissue levels over 200 ppm are excessive leading to toxicities).

Boron-containing fertilizers are not normally used in boron sensitive crops such as beans and snap beans.  Boron toxicity may also occur where starter fertilizer containing boron for other crops, such as corn, is applied to snap beans.  Boron toxicity in beans commonly appears as yellowing in unifoliate leaves with burning of leaf edges and yellowing of leaf edges of the older trifoliate leaves that can progress to edge burn.  In severe cases, plants will develop a scorched appearance and leaves may prematurely drop off.

Boron toxicity and deficiency symptoms can be diagnostic in tree crops.  Washington State University in their Comprehensive Tree Fruit Site has developed a useful guide to identify boron deficiency and toxicity symptoms in several tree crops (http://treefruit.wsu.edu/boron/).  The table is shown below.

Boron can be applied directly to soil via fertigation or as a foliar spray.  Because application rates are so low, it is difficult to obtain uniform fertilization by hand.  It is recommended to combine boron with other fertilizers to decrease application cost and obtain even coverage.  Normally, boron is not recommended as a seed treatment.

Always consult with your crop advisor to determine your crops’ needs for boron.  A few general recommendations are as follows.  For broccoli and kale, apply 3 pounds of boron per acre in mixed fertilizer prior to planting.  For Brussels sprouts, cabbage, collards and cauliflower, apply 3 pounds of boron per acre and 0.5 pound sodium molybdate per acre with a broadcast fertilizer.  Boron may also be applied as a foliar treatment to cole crops if soil applications were not made.  The recommended rate is 0.2-0.3 lb/acre of actual boron in sufficient water (30 or more gallons) for coverage.  Applications should be done early, as soon as symptoms are observed, prior to heading of cole crops.  Since boron deficiencies show in new growth, applications to mature plants will not make a difference.

Boron in manure is usually very low, ranging from 0.02 to 0.12 pound per ton in sewage and manure waste products.  At the higher concentration, a rate of 20 tons per acre would barely meet the plant B needs where B deficiencies are known.  Sewage sludge is not considered a good source for boron.

Granular boron fertilizers can be top dressed to an established alfalfa stand.  Combining with phosphate and/or potash fertilizers will facilitate even distribution.  Preplant (1-2 weeks before seeding) broadcast applications of boron are preferred over in row treatments.  When in season, boron should not be applied to actively growing green tissue to prevent injury.  For annual crops, apply as needed.   For example, alfalfa grown in boron deficient soils usually require a borated fertilizer mixture once every three years.

Foliar sprays can be used on severely deficient fields.  Generally, 0.1 to 0.3 pounds of boron are applied per acre.  However, do not spray on hot days or when the crop is under moisture stress.

Since a very low amount of boron is needed by plants, it is easy for toxicity to occur from over application.  This is especially critical for boron sensitive crops such as soybean and edible beans.  A major issue with boron applications is toxicity.  Both crops are commonly grown on sandy irrigated soils where soil tests for boron may indicate a potential deficiency.  Application of boron to sensitive crops should be avoided regardless of the soil test boron concentration. Soil test boron interpretations for alfalfa should not be used for sensitive crops such as soybean or edible beans.

Boron toxicity is typically exhibited in plants as a yellowing of leaves with scorching on the leaf edges.  Toxicity symptoms can occur anywhere in the crop canopy.  Since boron is not mobile in most agronomic crops grown, toxicity symptoms will most likely occur at the time that excessive levels of boron are made available to the plant.  Because boron is mobile in the soil, plants can in some cases recover from B toxicity with adequate rainfall or irrigation.

Boron is a fixed element in plants.  Therefore, symptoms usually appear in new growth.  It also suggests that boron deficiencies are best handled early in the crop cycle.  Care is needed with boron applications because of the low amounts needed and the variability in boron amounts needed by different crops.  There are soil tests and plant analysis tools that can be used for management decisions.  Proper use can significantly improve production, especially in high boron-requiring crops.  Boron fertilization can be even more critical in coarse soils that are low in organic matter.  So, boron is an important micronutrient that does it all.  Important for animals, important for plants, and most all, important for slime, a multi-million dollar a year toy.